Instagram’s looking to help live-stream creators maximize their opportunities with a new Live Producer tool, which will enable in-app broadcasters to stream from a desktop PC, and via various third-party streaming platforms. 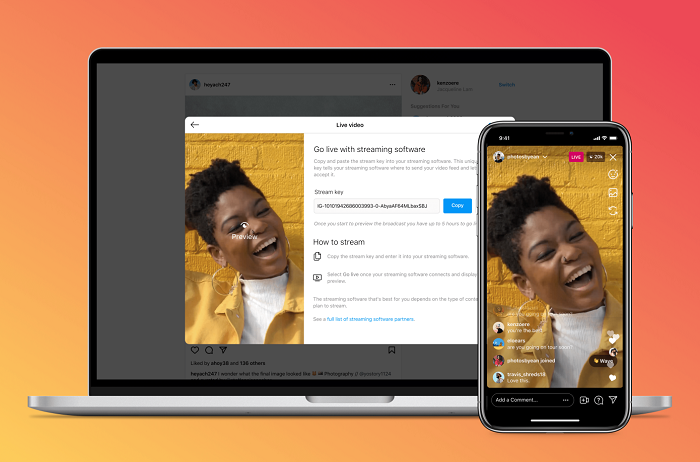 As you can see in this example, Live Producer will enable creators to use a stream ‘key’ – a line of program code – to connect into the Instagram Live back-end. That will then enable you to run your content capture through the streaming provider of your choice, with initial support for OBS, Streamyard and Streamlabs, which will then feed into your IG broadcast.

Though it’s not available to everyone just yet.

As Instagram told TechCrunch, it’s currently only available to a small pool of beta users.

“We are always working on ways to make Instagram Live a meaningful place for shared experiences. We’re now testing a way to allow broadcasters to go Live using streaming software with a small group of partners.”

But it could be a valuable addition, particularly as social apps look to push live shopping as a new opportunity, following the lead of Chinese social apps, where live commerce has become a $300 billion industry.

Indeed, the Chinese version of TikTok, called ‘Douyin’, generated $119 billion worth of product sales via live broadcasts in 2021, a 7x increase year-over-year, while the number of its users engaging with eCommerce live-streams exceeded 384 million, close to half of the platform’s user base.

More recently, the Chinese Government has sought to reign in the sector, and the high prices that influencers are now charging brands for live-stream exposure, which has slowed down its overall growth. But many western social platforms are now also eyeing live commerce as a key opportunity, both to help creators generate more income, and to bring in more direct revenue for themselves.

In some ways, the Chinese example also serves as a cautionary tale, with Chinese regulators additionally seeking to limit the amount that people can spend within streams, and improve age verification for viewers. Those updates are mostly focused on live-stream donation tools, and the obsession that viewers have with streaming celebrities, but they extend to shopping too – while they also highlight the distinct difference between Asian markets and the rest of the world, where live-streaming hasn’t caught on in the same way.

The question, then, is will it ever become a thing, and will people in other regions actually warm to live-stream commerce like they have in China?

On evidence, you would have to say probably not – but then again, there are some streamers who are generating big money from their broadcasts on Twitch and YouTube.

Even if these trends take hold just a little, that could still open up significant opportunities for various apps.

Which is where tools like this could come in handy, while they’ll also enable streamers to establish more professional set-ups for their IG Live broadcasts, which could help them build their following in the app.

We’ll keep you updated on any progress.

Steve Martin’s Only Daughter Mary: Everything To Know About Her