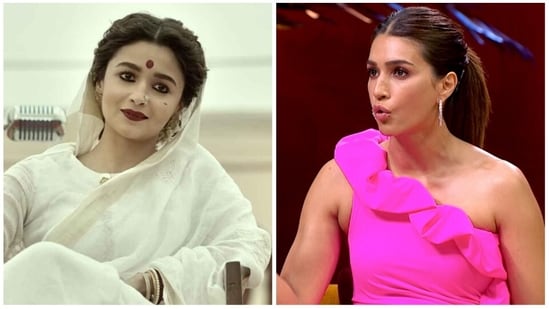 As Kriti Sanon on the latest episode of Koffee With Karan, host Karan Johar asked her about her competition with contemporaries, especially Alia Bhatt.

Kriti and Tiger made their debut in 2014 with Heropanti. She also gave an audition for Karan Johar’s Student of the Year, while the role eventually went to Alia Bhatt. Alia Bhatt was mentioned time and again in the show, mostly from Karan himself.

He asked Kriti Sanon about the competition she should feel from her contemporaries. He asked, “What about jealousy or competition or jealousy sometimes with your contemporaries? Do ‘I need to do this’ and look beyond (your) shoulder and do better than that. So much about being Aaliyah. Buckwheat is the best actor in the country. Is there acceptance at your level or is it driving you to get there yourself?”

Kriti replied that she is inspired by Alia Bhatt and others, but also mentioned that perhaps she is still not called the ‘best actor in the country’ as she is not getting enough opportunities. “Of course it motivates me, when I see great work it motivates me to do better…,” when Karan suggested, “Like Gangubai (Kathiawadi).” Kriti replied, “Yes, you too think ‘I would love to have such an opportunity.’ I feel like Mimi, as an opportunity, when it came to me, it gave me the confidence to put so much in it. Thin Layer. When I see Alia or some amazing actors, I think I need to get better at what I’m doing. So he’s always there.”

Kriti won the Best Actor (Female) award on Monday night at the Filmfare Awards for Mimi. This is his second major award for the film after IIFA. In Mimi, Kriti played the role of a surrogate for an exotic couple. However, when the parents leave the child, she decides to raise the child as their own son. Kriti gained a lot of weight for the film and her performance was appreciated by the audience.