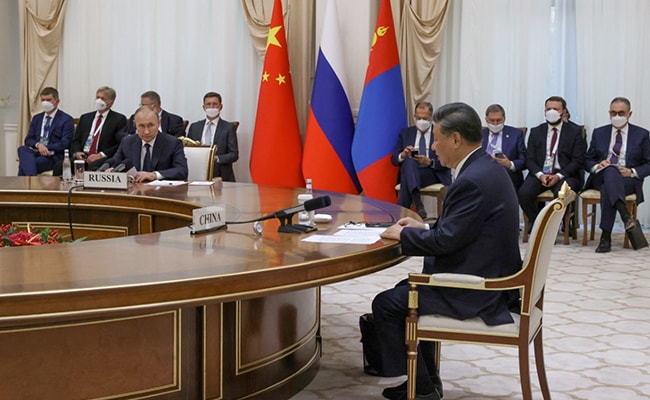 SAMARKAND, Uzbekistan: Russian President Vladimir Putin and Chinese leader Xi Jinping met in their first face-to-face talks since the conflict in Ukraine began Thursday, hailing their strategic ties in defiance of the West.
The two leaders met at two long round tables next to them together on the sidelines of the Shanghai Cooperation Organization (SCO) summit in former Soviet Uzbekistan.

The meeting was part of Xi’s first trip abroad since the early days of the epidemic. For Putin, this was an opportunity to show that Russia had not been completely isolated despite Western efforts.

“China is ready to make efforts with Russia to assume the role of great powers and play a guiding role to inject stability and positive energy into a world shaken by social unrest,” Xi told Putin during the talks.

China’s state-run CCTV channel quoted Xi as saying that China is ready to work with Russia to support each other’s “core interests”.

Putin has been openly critical of the United States, which is leading efforts to support Ukraine and impose sanctions on Russia.

“Attempts to create a unipolar world have recently taken on a completely ugly shape and are completely unacceptable,” Putin said.

“We highly appreciate the balanced position of our Chinese friends regarding the Ukraine crisis,” Putin told Xi, while repeating Moscow’s support for China in Taiwan.

Putin said after a US Senate committee on Wednesday took the first step toward Washington providing billions of dollars in direct military aid to Taiwan.

It was the first in-person meeting between the two leaders since Putin saw Xi in early February at the Winter Olympics, days before the Russian leader launched his military offensive in Ukraine.

The Kremlin has described the Shanghai Cooperation Organization summit in the ancient Silk Road city of Samarkand as showing that there is an “alternative” to Western-dominated international institutions.

The Shanghai Cooperation Organization — made up of China, India, Pakistan, Russia and the former Soviet Central Asian states of Kazakhstan, Kyrgyzstan, Tajikistan, and Uzbekistan — was founded in 2001 as a political, economic, and security organization that rivals Western institutions.

The leaders of those countries, as well as Iranian President Ebrahim Raisi, Turkish President Recep Tayyip Erdogan, and Belarusian President Alexander Lukashenko, were scheduled to attend.

Putin met with the leaders of Kyrgyzstan and Turkmenistan earlier in the day, as well as with my president and Prime Minister Shahbaz Sharif.

He said with Raisi and Sharif that relations were “developing positively,” while the Iranian leader told Putin that US-backed sanctions on the two countries would make their relationship “stronger.”

“The Americans think whichever country they impose sanctions on will stop. Their perception is wrong,” Raisi said.

For Putin, the summit comes at an important time, as his forces face major battlefield setbacks in Ukraine and amid a continuing Western push to make Russia an international pariah.

For Xi, it is an opportunity to cement his credentials as a world statesman ahead of the ruling Communist Party’s pivotal congress in October.

On Thursday, the Chinese leader also met powerful Belarusian leader Lukashenko, who was quoted by the state news agency BELTA as thanking him for “China’s serious support in these difficult times.”

Western leaders denied Lukashenko after a fierce crackdown on dissent two years ago and his support for Russia in Ukraine.

Chinese state media said on Friday that Xi would meet my two presidents that morning.

Former Cold War allies with a tempestuous relationship, China and Russia have converged in recent years as part of what they call a “borderless” relationship that serves as a counterweight to US global hegemony.

On Thursday, the Defense Ministry in Moscow said that Russian and Chinese warships are conducting a joint patrol in the Pacific Ocean and are planning live-fire artillery training at sea.

The main day of the Shanghai Cooperation Organization summit will be on Friday, with sessions involving all the leaders in attendance.

Security is tight in Samarkand, a large, tiled mosque city that was one of the hubs of the Silk Road trade routes between China and Europe, with a huge police presence in the streets and armored vehicles parked in the city centre.

If Musk Settles With Twitter, Taxes Play A Part