Told My Dad “Want To Marry Her, But She’s Christian”: Tejashwi Yadav To NDTV 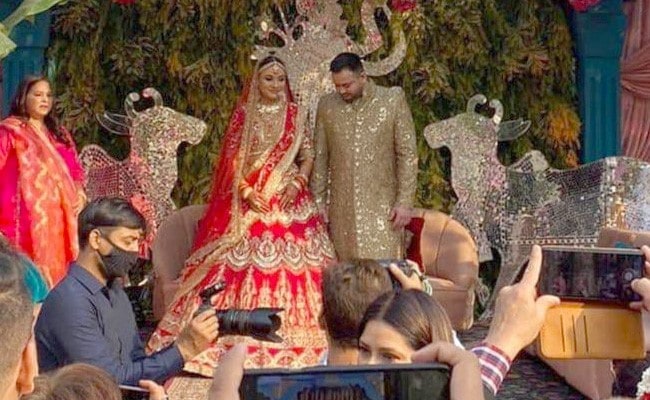 Tejashwi Yadav and Rachel Godinho (aka Rajshree Yadav) at their wedding in December 2021.

Tejashwi Yadav, the new Deputy Chief Minister of Bihar, today described his wife Rachel Godinho, or Rajshree Yadav, as “the perfect partner” and said his family fully supported his decision to marry her at the end of last year.

Talking to NDTV hours after he took oath as the second-in-command of the new Bihar government headed by Nitish Kumar, Mr Yadav said that in marriage, he sought “partnership and understanding.”

He said when he realised he had found that, he told his father, Lalu Yadav: “I’m dating this girl and I would love to marry her. But she’s a Christian.”

“People should know this about Lalu-ji,” he said, referencing his father, a political veteran, and the caste complexities of Bihar.

Mr Yadav, who is 32, added that his sisters had “arranged marriages, but not forcefully”, explaining that his father is a modern man in many ways. They were given the freedom to reject the grooms they were introduced to: “Nobody forced anyone.”.

“There’s been a perception about my father, our family, about Bihar. But things haven’t been like that,” he said, “My dad has always given freedom to my sisters. He would keep them at the forefront.”

Asked how he took the decision to not consider religion or caste, he also said, “I really wanted it to happen after both sides agree. We never wanted anyone to be unhappy.” It worked out without a hitch, he said, “I am happy. And my parents are happy.”

On her change of name from Rachel to Rajshree, he has said in the past that it was her decision as “people of Bihar will find it easier to pronounce”. “My father suggested this name,” he said last December.

He’d also replied to his uncle Sadhu Yadav (mother Rabri Devi’s brother) having objected to his marriage “outside of Yadavs”. “Younger people do not believe in furthering such differences,” he’d said, adding, “I respect my mama-ji. I don’t want to make it personal.”

Rachel aka Rajshri Yadav, who is from Haryana, has kept a low profile, and made a rare comment after her husband took oath yesterday. “I thank everyone,” she told reporters.

“I thank everyone,” says his wife Rajshri

“It’s good for people of Bihar, I thank them. All are happy,” says mother-ex CM Rabri Devi

“We have come to power to work,” says his brother Tej Pratap Yadav pic.twitter.com/9e1OvvXYPH

BJP leaders have been using Tejashwi Yadav’s marriage to taunt the RJD over its demand for a caste census. “The yuvrajs (crown princes) of both UP and Bihar have broken the caste barrier. Hence, their parties should stop worrying about caste census,” BJP’s Samrat Chaudhary, a former minister in Nitish Kumar’s JDU-BJP government, had said, also referring to Samajwadi Party leader Akhilesh Yadav having married outside the Yadav community.